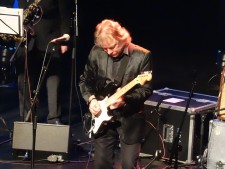 Alan Warner was born in Paddington, London,he started playing Guitar at the age of 11,he originally wanted to play a trumpet but had to settle for a toy accordion, then, his parents bought him a cheap Spanish guitar for Christmas, and he soon realised, listening to the twangy tones of  Duane Eddy, Hank Marvin, The Ventures, etc, that this was what he wanted to do.

After leaving school at 14 Alan played with several semi pro bands playing local gigs before turning professional at 16,he lived in Ireland for a while Playing the Dublin Club scene and touring the country,whilst living in Ireland he turned down an offer to join The Black Eagles with Phil Lynott who later went on to form rock band Thin Lizzy,on returning to England he carried on as a freelance guitarist playing various gigs and recording sessions.His first big break came when he went on tour backing Edwin Starr, The Toys and Arthur Brown.